The Interagency Working Group on Medical Imaging (IWGMI) has just published its final report that summarizes the efforts of the committee from its inception in 2015 under the auspices of the National Science and Technology Council. The IWGMI was formed to coordinate the Federal investment in medical imaging research and develop a strategic plan for future development.

The Academy of Radiology Research played an important role in catalyzing the creation of IWGMI and many Academy leaders provided input to the Working Group. The Academy and will work collaboratively with the NSTC to find ways to fund and execute these important research initiatives.

What is the IWGMI to the Academy?

The United States is the world leader in the advancement, development, and commercialization of medical imaging technologies that save millions of lives every year. In order for medical imaging to maintain its position as a leading job creator and innovator, it is vital that the federal government invest in the interagency coordination of activities related to medical imaging. While there are a number of federal agencies involved in medical imaging, their efforts are siloed and a need exists to align their missions and streamline regulatory pathways across the federal government. The Academy initiated a grassroots effort to address this gap.

The creation of the federal Inter-Agency Working Group on Medical Imaging within the National Science and Technology Council was catalyzed by Academy of Radiology Research. Our goal was to bring the medical, scientific and economic benefits of federal investments in biomedical imaging research into focus, and to advocate for federal funding to create a national roadmap for medical imaging research. Since it’s creation, the Academy continues to actively support and follow the progress of the working group.

“The Diplomatic Reception Room in the White House Eisenhower wing is so beautiful and inspiring. So was the sight of representatives from so many agencies listening to patient advocates talk about the incredible potential of imaging to transform healthcare. Kudos again to CIBR for securing the Interagency Working Group on Medical Imaging – an inspired move.” -Sheila Ross, Lung Cancer Alliance

“The presenters all made a point of suggesting contributory roles for all of the federal agencies involved in the IWGMI, and painted a picture of a ‘future state’ in which medical imaging’s contributions would be maximized and enhanced by a coordinated federal investment. In brief, all of the marvelous presentations to IWGMI could be ‘organized’ into 3 key clinical initiatives, including:  1) risk assessment and early detection of disease; 2) precision diagnosis of the complete nature of an individual patient’s condition; and 3) recommendation for a ‘rational therapy’ ‘either ‘medical’ or ‘surgical’, including targeted image-guided procedures.” -Steven Seltzer, MD 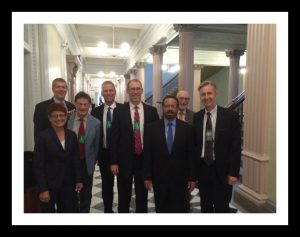